Because We Have Minimized Depression, Most Sufferers go Undiagnosed 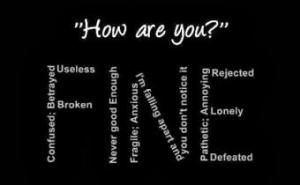 But greater acceptance of the medical model of depression — which has been the cornerstone of anti-stigma programming since World War II — isn’t necessarily correlated with lower levels of stigma. “This idea had a backlash effect,” says Pescosolido. “Moving to this medical belief hasn’t had the effect we hoped for.” It can make depression seem intractable — and if it’s inherited, it can be passed down to future generations. “People say, ‘I don’t want that person marrying into the family, because I don’t want my grandchildren to have depression.’”

Newer anti-stigma programs focus on sharing individual stories of mental illness, rather than repeating the message that depression is genetic. Watching a friend or family member go through an episode of depression humanizes the diagnosis:“The most powerful factor affecting stigma is whether or not you’ve had contact with a person who’s had mental-health problems,” Pescosolido says. Could reading a memoir have the same effect as talking to a friend who’s going through a depressive episode? Spending hours reading about Merkin’s struggles felt like a good substitute for personal contact — maybe even better, sinceshe is more adept than almost anyone at conveying her inner life. And though researchers haven’t studied the impact of reading about depression, they have demonstrated “that video contact can be almost as powerful as personal contact,” according to Pescosolido.

Merkin, for her part, sees incremental progress. “I think my book has coincided with a moment in the culture where it is beginning to open up to it,” she told me. “There is more of a sense that depression is fairly prevalent, that it starts early, that it’s not merely moodiness or recalcitrance.”

Even so, she still has to deal with skepticism about the authenticity of her depression. At a recent talk she gave, “People in the audience asked things like, ‘Would it help your depression if you protested against Trump?’ People wouldn’t ask if that would help your schizophrenia.”

And she points out that the most severely depressed people are not going to dinner parties and dishing about their antidepressants. “When I was at my worst, I didn’t do anything,” she said. “I couldn’t read, I couldn’t write. I mostly slept. That kind of depression isn’t in the public eye, because it’s silent.”

2. From “How Can We Fight Stigma Most Effectively?“:

Corrigan explains that contact is effective because not only does it decrease negative beliefs, it helps to replace them with positive ones.  It’s 2-3x more effective than education at changing stigmatized attitudes.

What advice does he have for us to share our stories effectively?  We should share stories of our illness experiences, but also about our recovery journeys.  We should talk about how we have been affected by stigma in spite of what we’ve managed to overcome, and conclude with a call to action to address this injustice.

The thing with contact, though, is that it requires us within the mental illness community to speak up.  To have the greatest effect, we need to not openly speak up anonymously online, but also “come out” as mentally ill in our regular environments.  We need to make it personal.  We need to demonstrate that there are many faces of mental illness, not just the stereotyped homeless person on the street.  That’s not to say that coming out is easy, but to really make a dent in stigma a critical mass of us needs to do so. We truly can be the change we wish to see in the world.

3. From “How to Tell the Difference Between Passing Sadness and Depression“:

Though the symptom list can be quite long and mirror some that are similar to those of sadness, if you’re feeling things such as depressed mood most of every day, diminished interest or pleasure in activities, significant weight loss or weight gain, daily fatigue or loss of energy, feelings of worthlessness or guilt nearly every day, diminished ability to think or concentrate, indecisiveness, recurrent thoughts of death, suicidal ideations, and/or attempted suicide for 14 days or more, it could be an indication that you are depressed.

For those who believe they have these symptoms, the next step is to consult with a doctor to identify whether you are dealing with depression. This is especially important if you’re in a time of crisis or loss.

Sadness — though a symptom of depression — is a normal reaction that everyone has when there is a tragic or sad event that happens in their life. According to Dr. Colleen Mullen, Psy. D., LMFT the feeling can usually be traced to events such as a breakup, job loss, or death of a loved one. Depression, on the other hand, is biological.

“You cannot ‘think’ yourself out of depression, whereas when you are sad due to life circumstances, you can usually tell yourself something to help you change your mood and get on with your day,” Mullen said. “Even though sadness from a life circumstance can last more than a couple of days, one is not usually sad nearly all day, every day as the diagnostic criteria for a diagnosis of depression calls for.”