Learning New Ways in Recovery to Communicate With Loved Ones 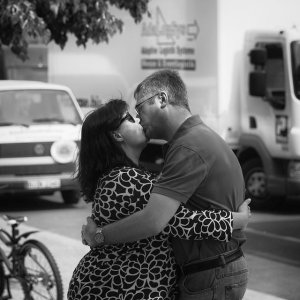 A big reason, if not the main reason that I drank too much, was to not feel my feelings. Not feeling them meant not having to acknowledge them, and–God forbid–share them with anyone.

1. From A Song Not Scored For Breathing by Hope

Thirty three years ago today Dearest One asked me to marry him. We’d been together for a week, meeting face to face, after having started out as pen pals when I was a very young teenager. The odds were certainly against us. I give God the credit for us making it for the long haul. Had we not become people of faith our relationship would have crumbled long ago.

Because we spent such little time together before we married – after we got engaged he went back home across the country and I stayed put to finish college – he had no idea I might have a drinking problem. I didn’t get drunk until 5 days after we married in a most embarrassing social situation for him which could’ve cost him his job and which resulted in a blackout for me.

In those early years of marriage and well, well into sobriety I didn’t know how to communicate how I was feeling other than to throw words and things at him. He didn’t know how to communicate his feelings other than to go silent and sometimes literally run the other way. At least once – no twice – it’s a very good thing what I threw didn’t hit him.

My sponsor and I are working through the steps. We’re on step four -using the Al-Anon step four book. Something happened within me shortly after we began working the steps – a keen awareness and desire to be a better human being. A realization of things that both surprised and humbled me. A voice within that insistently said, “If you get nothing else right in this life – be kind to this man.”

My summer was spent mostly away from home and after going on a silent retreat I met Dearest One in a campground for some ‘us time’. I don’t know if it was because I came from six days of silence or whether our prolonged absence from one another made my awareness keener but a few days into our camping trip I said to him, “You know what I’ve noticed? I’m hyper critical and super bossy of you.” He told me that he had noticed it, too and that it wasn’t much fun. I apologized and told him I was awareness and working on it. I felt no defensiveness about my actions – no need to justify a thing. He was matter of fact when he confirmed that my awareness of my actions was not my imagination.

Such a better way of communicating than throwing things and words. Thanks be to God.

2.  From Reignite the Fire by Rick: “7 Ways to Fix Relationship Drama” ( I added an excerpt–for the complete post go to the link):

1) You can’t “help” people with their own personal issues

A common problem in relationships is that both you and your partner may be bringing in your own personal issues. Whether it’s due to trust issues from a previous relationship, some sort of abuse, upbringing, etc. we all have issues.

The problem is when we let these dramatic issues affect the relationship. Like for example if you’re dating someone with BPD, your partner is most likely bringing a lot more issues to the surface than you are.

So a normal response for you may be to try to help your partner solve these problems so the relationship can be better. Well, this is a mistake. By trying to ‘help’ your partner, you’re leaving your own needs behind and basically allowing this behavior to continue.

The only type of ‘help’ you should be doing is being firm and setting boundaries. Don’t feel that you need to let your partner get away with treating you poorly just because they have issues.

2) Learn to put yourself first

To continue along the thread above, you need to put yourself first. When your focus is on solving your partner’s drama and issues, you lose track of your own needs and your own growth.

As I consistently teach, your number 1 habit should be daily, consistent growth. Each and every day you should be working on growing your knowledge, your passions, your skills, etc.

Make sure you have time for you. You are the most important person in your life – not your partner. That may come at a shock for you. But when you put yourself first and you’re not afraid to put your foot down, it’s easy to put an end to the drama.

3) You can move on without them

So continuing on my point above, if you find that you haven’t been able to find any time for yourself with all the constant drama going on, then maybe the best idea is for you to take a break.

Listen closely to me here – being able to walk away from a toxic environment is one of the most powerful things you can do for yourself. It sends a big message when you’re willing to walk away. So you need to ask yourself if you really need this person in your life at the moment?

3.  From codependentlife: “Stepping away from professional victims“:

Today I am writing about letting go of unhealthy relationships. I have a person in my life that is always in a crisis. I have stepped in and saved them from themselves many times. No, they are not an alcoholic or an addict. What they are is a professional victim. It took me a while to realize how codependent my relationship was with this person. It took me even longer to realize how much I enabled them. You see, in my mind, I was only trying to help them turn their life around. In reality I was playing God.

But, no matter how much I helped them or saved them, their life never got any better, because somewhere along the way in their life’s journey, they became a professional victim. I cannot even begin to describe to you how difficult and heart breaking it was to me disengage from them and their problems, and allow them to live with consequences of their own making. You see I love this person and I want the best for them. Separating myself from their problems was like having and itch and not being able to scratch it only a thousand times worse.

My enabling was more than running interference between someone and their consequences. It was tolerating and accepting their unacceptable behavior as well. It was allowing them to tell me all of the chaos in their life, and destroying my peace of mind worrying about them, and then watching them turned around and do the same thing over and over again. It was allowing my life to be disrupted because they did not plan or accept responsibility for their life.

Their rights end where mine begin. Which means that I have a choice of continuing to allow this person’s chaos to disrupt my life or I could walk away. It brakes my heart that this person feels abandoned by me. Intellectually I know that I am doing the right thing, so why did it not feel right. I’ll tell you why it does not feel right, because I am codependent as all get out with this person.