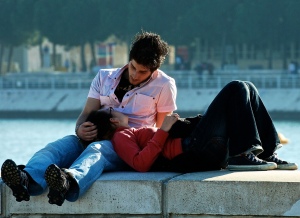 The following is a repost from Mary Jo Rapini. This is exactly the main cause of my last divorce except I called it affection.

Most marriage experts will agree that sex is not the number one killer of a marriage or long-term relationship. In fact, the majority of marriages that are happy rate their sex lives with one another on a scale of 1 to 10 as being a six (10 is the best). They are happy with it being a six though, and they feel connected. Happy marriages do have one feature that bad marriages do not have. They have more frequent touching.

We can see the deleterious effects of not enough touch with premature infants who are severely ill and placed in ICU. When these babies are touched and held by their parents their heart rates improve, as do whatever medical issue they are dealing with. We also witness at times of severe crisis the importance of having the loved one’s partner next to them. Sometimes when the patient is not responding to any of the medical interventions, they will respond positively to their partner’s touch or body cuddled next to theirs.

Women are touched more than men in our society and this is an important point to consider. Women hug one another when they meet, they may kiss one another, and children often are more demonstrative toward mom than they are with men. This is unfortunate because men benefit physically as well as emotionally to being touched just as women do.

When couples that have a distant relationship fail at keeping the relationship intact, very seldom is it the absence of sex that’s to blame. More likely it is the lack of connection one is able to provide for the other, and the lack of touch.

In hospices, ICUs, as well as in assisted living homes, you will see patients hold on to their last breath until they are reassured by the person they love most that it is okay for them to go on. They will let go easier when that person is holding their hand while giving them permission that they will be okay on their own.

Touch is so innocently easy to give, but yet we suffer more from loneliness than any other disease in the world. How can a world that is media connected down to a Google map being able to identify exactly where you live be so disconnected with touch? Much of it is due to the hyper sensationalism of sexuality. But sex doesn’t do much without touch. In fact, who can conceive of sex without touch?

If your relationship feels distant and you no longer know what to say, try touch. Say less to your partner, but touch more in these suggested ways:

In the media sex gets a lot of attention. But in a healthy relationship touch trumps sex for building a connection and helping your partner feel valued and loved.