I Love Reading About Labyrinths! 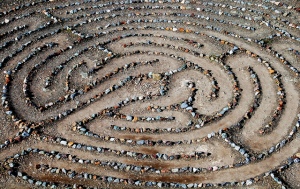 Labyrinths have helped people to become centered so that serenity becomes a welcome companion. The Labyrinth Society has a labyrinth locator so that anyone may locate labyrinths locally. it also has a labyrinth market. The products are listed from A-Z and include labyrinth builders. portable labyrinths, and finger labyrinths. The geographic index lists suppliers locally and includes gifts, clothing, teachers, facilitators, workshops, events, music, art, travel, and misc.

Some other sites and excerpts from them:

The Labyrinth and Acceptance

“The labyrinth is one of the oldest of symbols; it depicts the way to the unknown center, the mystery of death and rebirth, the risk of the search, the danger of losing the way, the quest, the finding and the ability to return. If we follow the path of the labyrinth from the floor of Chartres Cathedral we can observe that in the course of  its tortuous evolution it not only connects the periphery with the center (the Self) but actually fills out and covers the total plane surface of the circle; in striving for the center the path integrates the total circle, the total field.” Edward Whitmont, The Symbolic Quest, pg. 306-307.

From Fast Company–a slideshow that included 21 slides about this unique hospital that was designed by the patients.

The View from Above

“The right way to wholeness is made up of fateful detours and wrong turnings.” Carl Jung

“I know quite a few people who have been living life along one vector.  It’s as though the compulsion in that direction has no allowance for variance.  I’ve ridden vectors for extended periods as well.  It’s been my experience that such a vector eventually constellates opposition, which for lack of a better definition, feels like fate.  Actually, it feels like a brick wall.”

“I remember this game which I played as a child, I believe it was called Labyrinth. It was a wooden board that could tilt in four directions. The object was to control the marble by tilting the board, running the marble through a maze and prevent the marble from falling down the traps (holes in the board.)”

‘Fifteen months ago, Franklin Horowitz was in a bad place in his life.”

“Entangled in “addictive issues,” he was lost inside his own skin. But then the Voorhees resident started walking the labyrinth at an Episcopal church in Bala Cynwyd, Pa.”

“Though Jewish, he was drawn to the winding path cut in the grass near his childhood home. On it, he discovered the labyrinth’s power for contemplation.”

“I was really meditative,” Horowitz said. “I was grounded with the earth. There was something about the way you took specific twists and turns while being cognizant of where you were going, in relation to your center.”

“Right there, in the middle of the thing, he called a counselor and arranged to get help.”